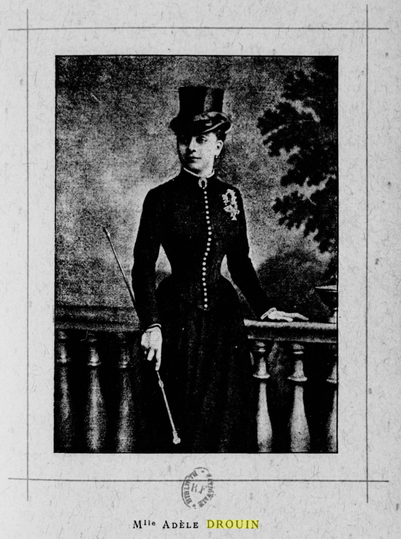 Scores or maybe even hundreds of women in nineteenth century Europe performed as haute-école riders in circuses and hippodromes* before audiences from all classes. A handful of them became famous, as the expansion of the newspaper market meant that they were the first women to be widely celebrated for their equestrian skills (other than the odd huntress in Britain, some queens and princesses). Their feminity was considered a draw – the spectacle came not just from their performance of complicated dressage movements, but also from the fact that they were respectable and attractive young ladies whose magnificent horses obeyed them utterly.

In a competitive marketplace, these horsewomen needed to stand out. They needed a gimmick. It might be a pink riding whip. It might be the tiniest waist. If you were Jenny De Rhaden, you made your horse rear then laid down on his back, your hair trailing into his tail and onto the floor (and lost your sight when the stunt goes wrong). Adèle Drouin had a unique party trick – she rode a sophisticated pattern of dressage moves with no bridle or even a neck strap on her mare, Diane.**

I first learned about Adèle in Hilda Nelson’s The Ecuyère of the Nineteenth Century Circus, and this post is the result of a few random dips I’ve taken into old French newspapers to try to find out more about her life. It’s not an exhaustive biography but should hopefully give some sense of the often long working lives of these women and the tightrope they walked between celebrity and notoriety in a time when there was little room for error if you were a woman.

According to Baron de Vaux, she made her debut at the tender age of 18 or 19 in either 1865 or 1866 at the hippodrome on what is now the avenue Bugeaud in Paris. He describes her thus (my probably faulty translation):

Of medium size with a pretty face and a marvellously well-made bust, endowed by nature with all that could make her contours more seductive, she was charming in the saddle from the very first day and soon acquired an exceptional bearing.

With M. de Corbie as a teacher, she rode the horses who performed the airs above ground at Versailles and was never unseated. De Corbie had inherited his skill in training “amazones” from his own tutor, the Comte de Montigny, who wrote L’Equitation des Dames. Unlike many horsewomen who lacked balance or suppleness aside, his pupils had no problem with cantering on the left rein, according to the critic “Gladiateur II”.

When de Corbie trained a white horse to perform without a bridle, it was Adèle who first rode him at the hippodrome. When the hippodrome burned down in 1869, she was snapped up by the Cirque des Champs-Elysées and rode there on Diane. Here is their routine, as detailed by de Vaux (all without a bridle, and again, beware my sketchy translation, my International Horseman’s Dictionary wasn’t quite up to the task):

How was Diane trained to do all this with no bridle? According to de Vaux, it’s done by teaching the horse to interpret taps of the whip as instructions instead of rein pressure. Eventually, the whip doesn’t even have to touch the horse for it to respond, and later voice commands can be used. It’s thought-provoking – we should remember that the rein, bit and boot are languages that we have chosen for the horse and not necessarily the only ones that can come to have meaning for him.

To give you an idea of a typical evening’s entertainment involving Adèle, here’s the show on offer at the Cirque Napoléon in October 1868, starting at 8pm (again, I’ve done my best with the translation):

“Travail à cheval” by Mlle Lehmann [no idea what this horse work involved].
La Cachucha danced by Price junior [a Cuban dance performed with castanets. I believe the Prices in this bill are a famous musical clown dynasty, one of whom was painted by Renoir].
Ribbon jumping by Mlle Monfroid [ribbons were run from the balcony to a pole in, I would guess, the centre of the ring. Mlle Monfroid stood on a cantering rosinback horse and leapt over the ribbons]
The Grotesque Dwarves – performed by Jacob and Lehmann.
Le Solo interrupted by Price.
The clown and his elephant, by Chadwick.
Debut performance of the horseman, Pacifico.

Jumping through hoops [presumably on a rosinback] by Mme Loyal.
The Icarus Games, by Russels and his children.
Adèle on Diane.
Comical interlude by Price senior.
Debut of Hernandez, Spanish horseman.
The Little Postillion by Leguay junior.
Debut of the gymnast Farinis and his son.

By 1875, Mlle Drouin was so well known that Le Figaro had to assure its readers that she was not the unfortunate labourer’s daughter, named only as Adèle, who was described as “the sad heroine of the nocturnal drama at Clichy”. This referred to a story the newspaper had printed the day before, headlined “The Mysteries of Clichy”. The Adèle in this story is a beautiful former écuyère known in her days at the hippodrome for her striking figure and bold eye but now long forgotten by the boulevardiers. I include part of this shadow Adèle’s story here because it makes an interesting contrast to that of the more virtuous Mlle Drouin.

Figaro describes the shadow Adèle riding a white horse with neither saddle nor bridle and pulling off astonishing feats in her performing days. When the hippodrome burned down, she, too, had a contract with the circus, but she also had a drink problem, and her poison of choice was absinthe. She arrived at work drunk and was promptly dismissed. Her subsequent fall was rapid. She fell in with ex-cons. In the midst of a row over some kind of gambling match six or eight months later, one of Adèle’s admirers knocked out his opponent in a cabaret in Saint-Ouen (an incident also covered by Figaro). Adèle ended up serving three months in prison while her partner was put away for five years.

By this time, she was 33 years old. She rapidly found herself a new partner named as “A…..” who was formidably strong and known throughout Clichy, Saint-Ouen and Saint-Denis. This was, Figaro says, less a love match than a business association. Adèle would pick up men and take them to a room in an isolated house on the route de la Révolte, whereupon A…. would stride in as the “outraged husband”, batter the unfortunate man, strip him of all his worldly goods and throw him out into the street.

This worked well until one victim was rescued by a neighbour, Madam L….., who helped him testify to the crimes. The gendarmes went to arrest the pair, but A…. spotted their approaching tricornes, jumped out of the window, scaled a wall and scarpered towards Paris. Adèle disappeared. A few days later, the police staked out the house on the route de la Révolte and nearly caught A…, who escaped once more. A…. then went underground, finding a job in an oil factory in Clichy, where he was recognised and once more evaded arrest.

Two days later, a pair of gendarmes spotted Adèle the square au Batignolles and reasoned rightly that A…. could not be far away. The gendarmes seized him and threatened him with a gun. Adèle slipped away in the uproar and out of this blog post, because at this point I’m going to set this rogue Adèle to one side, lest I get lost in the archives. Maybe I’ll write more about her at a later date.

In June 1885 our respectable Adèle Drouin was still going strong. She appeared at the Cirque d’Été in a quadrille of eight “goddesses”, four of whom were haute-école riders. Adèle played Minerva, Mathilde Vidal was Bellone, Thérèse Gautier Amphitrite and “Mlle Lencka” Diana.

In 1893 she found herself dragged into a scandal involving another écuyère. Jenny de Rhaden’s husband had shot and killed a circus horseman who had been corresponding with his wife. A newspaper published a photograph of Adèle mislabelled as Jenny. I wonder if it was this one from the famous Studio Nadar, as Jenny was also photographed there. A month later Adèle was in the papers again after a “lively discussion” with a madame Marguerite de Clarynkal and had to be separated by circus proprietor Franconi. The writer at Gil Blas (possibly de Vaux himself) believed that the fault was all on Adèle’s side and hoped that she would soon apologise. It was rather a blot on a lady’s history.

According to de Vaux, Adèle left behind the circus and the hippodrome when she married, which would – if we can trust the baron – have been some time in 1893, the year the book was published and the last two reports in Gil Blas cropped up. She would have been 46; 28 years is a formidable reign in any sporting or entertainment field. The era when the écuyère was queen of the circus was ending, and she timed her retirement well.

On the 26 April 1911, Comoedia reported that, at the age of 64, Adèle had been committed to an asylum. At the time she was living on the avenue de Wagram. She had become paranoid and was sitting up all night with a candle in hand. She then turned up at the local police station wearing little but a veil-like piece of cloth, in the belief that the assassins  pursuing her would thus not be able to see her. The scan of the article at Gallica is hard to read, but possibly says that she was married to a very rich antique dealer from the Madeleine district of Paris and lived in a modest flat that cost 400 francs to rent.

She died in 1913 and Baron de Vaux was once more on hand to record the achievements of a horsewoman he’d once found “delicious” and mourn the passing of the “écuyère vedette“phenomenon. Sadly this piece has been too poorly scanned for me to read and will have to wait for another time.

* A hippodrome was shaped rather like its Roman namesake and roofed; a circus was not a tent but a building with a ring as its central focus.

** In the 1840s and 1850s, an écuyère called Mathilde Monnet performed with neither bridle nor saddle. She probably used one of these, a surcingle with a leaping head attached; it would have been easy to hide under the long, full skirts women habitually worse for sidesaddle at that time. I saw one in the tackroom at the Académie du Spéctacle Equestre at Versailles in late 2015 when I was researching The Age of the Horse. Going by the dates, Mathilde was not the shadow Adèle.

Author of The Age of the Horse: an Equine Journey Through Human History and If Wishes Were Horses: A Memoir of Equine Obsession. View more posts

This site uses Akismet to reduce spam. Learn how your comment data is processed.